During the fall season, participants have the choice of three sports: soccer, volleyball and softball. All games are played on the weekends, either in the Payne Whitney Gym or at the Intramural Fields. Teams must provide their own equipment, uniforms and transportation.

The most popular of the fall sport offerings, the soccer program offers a Co-Rec experience with two divisions based on skill level. Games are played mostly on Sundays, but teams continuing on to the playoffs must be prepared to play on a Saturday. Games start in the early afternoon. 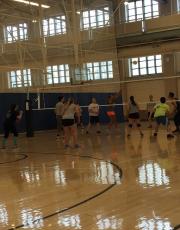 As the only fall indoor sport, the volleyball matches are played both on Saturday and Sunday at the Payne Whitney Gym in the Lanman Center. Games start in the  morning, usually around 10 AM . A supervisor will be on-site to collect scores and assist with court set up. Participants can choose to play in either the competitive or co-recreational league. Volleyball is the only program that runs in the fall, winter and spring seasons.

The softball league is a great social atmosphere for participants looking to compete while meeting new people. This co-recreational league is offered in the fall, spring and summer seasons. During the fall, participants should plan on playing mostly on Sunday afternoons with the potential for the occasional Saturday game. Games start in the early afternoon.  Also, teams continuing on to the playoffs must be prepared to play on a Saturday.